The new Omega Speedmaster Mark II Rio 2016 is the latest Omega Olympic commemorative watch. The Omega Olympic tradition started with the 1956 Melboune Olympic Seamaster XVI and was followed by a mechanical Quartz Seamaster for the 1972 Munich Olympic games.
Each Olympics since has brought a special edition watch and for the Rio 2016 Olympic Games Omega has chosen its re-edition of the 1969 Omega Speedmaster MK2 chronograph. The Rio 2016 Speedmaster MK2 comes with a unique dial reflects the achievements of the athletes that will take their place on the podium.
According to Omega, the chronograph “sub-dials are decorated with a bronze ring, 18K yellow gold ring and 925 silver ring respectively – a design that recalls the medals awarded to Olympic champions.” 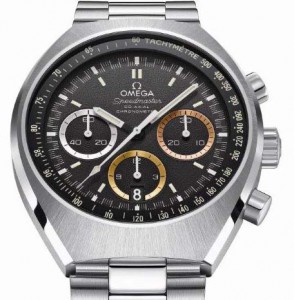 The Omega Speedmaster Mark II will be produced as a limited edition of 2,016 pieces. Sources at Omega reveal that the watch will not be available in Canada till late next year and will retail for $6,500 Cdn.
Here is the official press release detailing the features and history of the watch;

Each Olympic Games is marked by excitement and a captivating spirit; spectators from around the world are inspired by the golden moments they witness and citizens of each nation are united as they cheer for their favourite Olympic athletes.

The Speedmaster Mark II Rio 2016 is a tribute to the Rio 2016 Olympic Games and the chronograph’s unique dial evokes the feelings of glory and triumph that those very same athletes will experience when they take their place on the podium.

Inspired by the 1969 model of the original OMEGA Speedmaster Mark II, the polished and brushed stainless steel case is barrel-shaped and has a polished crown and pushers. Beneath a flat scratch-resistant sapphire crystal is a matt black dial featuring a 30-minute recorder at 3 o’clock, a 12-hour recorder at 6 o’clock and a small seconds sub-dial at 9 o’clock. The sub-dials are decorated with a bronze ring, 18K yellow gold ring and 925 silver ring respectively – a design that recalls the medals awarded to Olympic champions.

The transparent tachymeter scale on the sapphire crystal is illuminated from beneath by an aluminium ring filled with Super-LumiNova. The varnished white and black hour and minute hands, chronograph seconds hand and hour markers are also coated with Super-LumiNova, making it possible to read the time in a variety of lighting conditions. The Speedmaster Mark II is the first watch in OMEGA’s collection that makes it possible for the wearer to see the tachymeter scale in the dark. 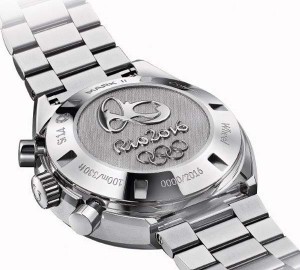 The screw-in caseback is stamped with the logo of the Rio 2016 Olympic Games and is engraved with “Si14”, “Column Wheel” and the limited edition number of the wristwatch – only 2,016 pieces of this model will be produced.

The polished and brushed stainless steel bracelet is complete with OMEGA’s patented screw-and-pin design and a foldover rack-and-pusher clasp. The length of the bracelet can be adjusted by releasing the outer clasp and sliding the inner clasp.

The Speedmaster Mark II “Rio 2016” is powered by the OMEGA calibre 3330 equipped with an Si14 silicon balance spring and a Co-Axial escapement with three levels. The reliability delivered with the combination of these exclusive components is such that your timepiece is offered with a full four-year warranty.

The Speedmaster Mark II “Rio 2016” is water resistant to 10 bar (100 metres / 330 feet) and is offered in a special presentation box with a certificate of authenticity.

OMEGA and the Olympic Games

OMEGA will serve as Official Timekeeper for its 27th Olympic Games when the incredible sporting spectacle makes its way to South America for the first time. The brand looks forward to offering its timekeeping and data-handling services to each participating athlete at the Games and is proud to measure, record and display the medal-winning results that will make Olympic history in Rio in 2016.