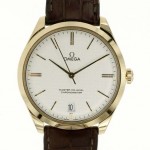 From a historical perspective, the watch pays homage to the Omega Trésor collection which debuted in 1949 and featured the legendary Omega 30mm calibre movement.
The Omega DeVille Trésor Master Co-Axial may look like a simply elegant gold dress watch but there is a whole lot of technical innovation that Omega has utilized in this watch. As you can see from the name, the watch uses a variation of the Omega Co_axial movement inside. The Omega Calibre 8511 movement is
manual wind movement featuring two main spring barrels good for 60 hours of power. The balance hairspring is made out of silicone, a non magnetic property that explains the Omega Master Co-axial Chronometer’s > 15,000 gauss anti-magnetic rating.
Visually the large gold wrist watch is stunning. The watch features a large white hobnail textured dial with a date display at 6 o’clock. The yellow gold stick hands match the solid yellow gold case and crown.
The rear of the watch features a sapphire case back allowing owners to view the Omega hand-wound caliber 8511 movement. Of note is the level of finish on this stunning movement. The large solid gold bridge is a highlighted against the steel pieces fished in swirling etched patterns.
The watch is pre-owned but very lightly worn as you can see from the incredible condition. The solid 18 karat gold case measures 40 mm wide and just under 11 mm thick.Because most of the 40 mm size is occupied with that stunning white dial, the watch has a much larger wrist feel than if it was a divers watch with a rotating bezel occupying the space instead.
The watch is supplied with all the original packaging, boxes and paperwork. The watch is also supplied with the original brown Omega Alligator strap and original signed yellow gold Omega buckle.

Read about the this fantastic Omega Master Co-Axial Chronometer here