An over sized Omega Seamaster Chronostop, originally water resistant to 120 metres. This watch features a manual wind flyback stopwatch feature. Press the top pusher and the red sweep second hand starts running. Push again and the hand flies straight back to the 12 o’clock resting spot. Holding the pusher in when you press it to reset will pause the second hand allowing you to see how many seconds have passed. You can also read the index on the outside tachymetric scale.

This Omega Seamaster Chronostop is in great condition and was just serviced by my watchmaker. The crystal was changed and an original Omega hesalite acrylic model was installed. The watch is fitted with an Omega 17 jewel manual wind calibre 865 movement.

The watch dates to 1967 and exudes the style common during that era. Fewer than 150,000 of these large sports watches were rumored to have been produced.

The steel case measures 41 mm wide by 47 mm long, slightly larger than a Rolex Submariner from that period. These watches were produced in a divers watch case and originally certified water resistant to 120 metres. 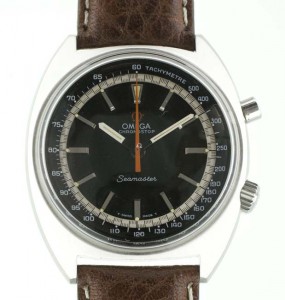