Tag Heuer is one of the most popular watches in the marketplace today. The company has a long and storied history dating back to when they were just called Heuer watches. The watchmaking firm Edouard Heuer and Co dates back to 1864 when it was founded in Switzerland by its namesake. In reality, the original founder of the company was named Edouard Heuer, which eventually became Ed Heuer & Co when his sons began importing the watches into the US in 1912.

Ed Heuer was a pioneer and held the patent for the first watch to be wound by a crown. The company would also later develop a groundbreaking waterproof chronograph which would cement its involvement with sports timing. This association spanned many years with the Olympics and later Formula One auto racing.

The company has seen its share of ownership changes over the years. In the 1960’s it bought the Leonidas watch company to become known as Heuer-Leonidas. The following decade, the combined firm was bought by Piaget. During the 1980’s Saudi owned Techniques d’Avant Garde, well known at the time for its involvement with McLaren in Formula One, bought the watchmaking company and it has been know ever since as TAG Heuer. Most recently the firm was acquired by the LVMH Group.

Vintage Heuer watches have been steadily gaining in price over the years. In September 2013 an early Heuer Autavia went off for a stunning $25,000USD after buyers premium. Interestingly 4 years earlier the same watch sold for $3,500 through the same auction house. 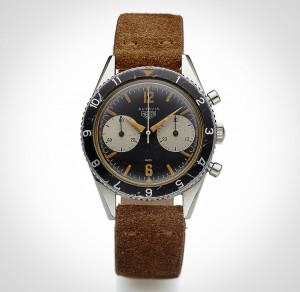